Laugharne is a real castle in Southern Wales, albeit a ruin, that dates back to the 13th century. Inferno, being the Chieftain of a formidable clan, deserved a stronghold as benefiting his status. My initial experience with the location was via the internet (Google is another dear collaborator) however this past year I had the good fortune to physically visit the real castle. For me, it was like meeting my favorite movie star. I think I giggled the entire time my husband and I explored the site. To be in this magnificent place that I had dreamed of, to touch the stones, to look out into the estuary, to imagine my characters within its walls – it brought Blood of Kaos to life. 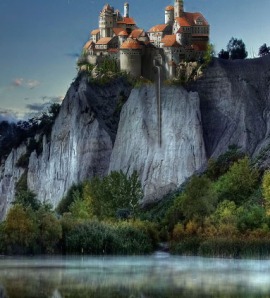 When Dar’s new home was originally created it did not have a name. Once I moved to the UK, it began to niggle in the back of my mind that perhaps it should, especially when even the smallest of terraced houses here have been graced with one. But what was appropriate? It must reflect Dar’s strength and character, it must represent. Nothing seemed to fit. In truth, his homestead was not named until one of my final edits just before publishing. I believe that was edit number ten zillion or round about there anyways. Sólskin, which is Icelandic meaning sunlight, came to be. 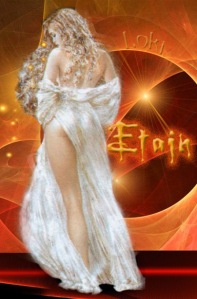 And speaking of names, my original card in Superdudes had been Nesamia. When I joined the LOKI clan I felt it was time for a change. I wanted a name that exuded strength, something different from everyone else. At that time, the name Etain was virtually unknown so I took it on. Etain is Irish meaning shining star. I like stars, I like shiny things, but aside from that it felt powerful, so yeah, Etain became my new moniker. Not long after, I was in search of a name for Dar’s brother and came across the old Irish legend of Etain and Midir. The love story of Midir, the proud and handsome son of the Dagda, the father of the ancient gods, and the beautiful Etain, is probably the most famous romance in Irish mythology. The supernatural intervenes in the affairs of the couple who have subsequently become fairies in the minds of the people. (http://ealasaid.webs.com/storybehindthenames.htm)  However the relationship between my Etain and Midir has no love or romance. Furthermore, there certainly isn’t anything ‘faerie’ like about my version of Midir either.